The story of Posta Stamps charismatic director, Mrs. Svanbjørg Manai, who is celebrating her 40 career anniversary on April 1 this year. 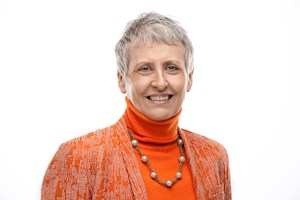 It has hardly escaped anyone's attention that Posta is celebrating its 40th anniversary. On April 1st 1976 the Faroese Department of Post Denmark was separated from the Danish organization and became the Faroe Islands' own independent postal service under the name Postverk Føroya, later Posta.

There is a parallel narrative to this anniversary, the story of Posta Stamps charismatic director, Mrs. Svanbjørg Manai, who is also celebrating her 40 career anniversary on April 1 this year. She has been with the company from the very beginning and over the years she has become more or less synonymous with the company’s philatelic enterprise.

When the philatelic department of the new Faroese postal administration was being established the young Svanbjørg Manai of Tórshavn was headhunted due to her language skills. Linguists were needed for the customer service - and Svanbjørg was hired along with two others. At first she worked as a temporary employee – her future plans did not include staying in the job. When paying the wages at the end of each month, Faroe Post’s former personnel manager, A. G. Nielsen used to ask Svanbjørg if she would be willing to stay on a permanent basis. Svanbjørg declined the offer.

The reason for Svanbjørg’s restraint was that she was  not planning to stay home for long. She had lived in Germany, France and Norway, and wanted to go back out into the world, before settling in a permanent position. It sounds quite amusing for those of us who have followed Svanbjørg’s career over the years. She is undoubtedly one of the most travelled Faroese of all times, precisely because of her job. It was a standing joke that when you called Svanbjørg on the phone you never knew beforehand what country she would reply from.

The Philatelic Department was from the outset a modern company, using the most up-to-date techniques and ideas. Its first manager, Jørgen Gunnarson, introduced electronic data processing to the customer service. This development was continued during the management of Knud Wacher. Customer care was given priority and the Department made active sales efforts by participating in exhibitions and philatelic events around the world. It was Svanbjørg’s main responsibility, along with others, to represent the Philatelic Department to the outside world. She who did not want a permanent job because of her travel plans, was almost constantly on the move on international assignments on behalf of  Faroese philately.

The Philatelic Sales Department was established in 1986 with Svanbjørg as manager. Along with the head of the Philatelic Department, the equally charismatic Knud Wacher, and the director of the Faroese Post, Esbern Midjord, they formed a highly  professional team. They took all major decisions concerning publishing policy and stamp motifs until the retirement of Esbern Midjord in 1998. Wacher was the modern bureaucrat and manager who took care of business management and administration, but did not care much for travel and representation. Svanbjørg therefore became the face of the Philatelic Department and its international representative.

The collaboration with Knud Wacher continued and the guidelines that had been established early on are still in force for Faroese stamp issues. Each stamp is supposed tell a story and serve the function of a small window into Faroese culture, history and society. The sales strategy is outgoing and Faroese philately makes a virtue of being represented in the wider world.

When Watcher retired in 2006, Svanbjørg Manai replaced him as the manager of the Philatelic Department. At the same time extensive structural changes were made. The organization  Postverk Føroya was reorganized into public limited company under the name of Posta. It was a turbulent time with great change. The company’s restructuring and rationalization was necessitated by the changed role of postal activities. The new organization now functions as a modern logistics company and publisher of philatelic products.

This year Svanbjørg Manai will be able to celebrate her 40th career anniversary along with Posta. These years have been eventful  for the girl who did not want to settle down because of  her wanderlust. Over the years, she has travelled around the world several times, while also becoming a pioneer among Faroese women in her capacity as a manager outside of traditional women's professions. But if we know her right, she does not give this a great deal of thought, her eyes being focussed on the prospects ahead.

Congratulations on these 40 years, Svanbjørg! May many interesting travels await you!