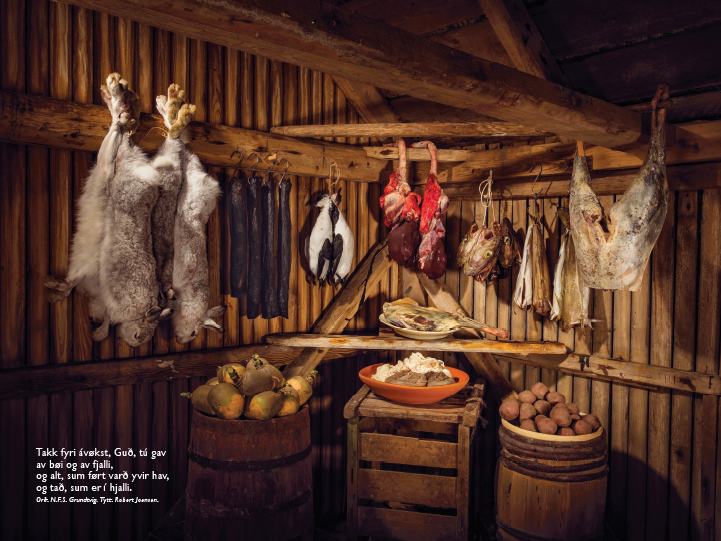 Nordic cuisine is the theme of the joint Nordic stamp issue this year. The Faroese contribution to this issue depicts some of the traditional Faroese specialties which are stored in the so-called “hjallur”. This is the Faroese variant of the pantry, a drying shed ventilated by the wind all year round. Hjallurin serves both as cold storage and a setting for various forms of food preservation.

The location of the Faroe Islands in the middle of the North Atlantic has always had a crucial impact on food preservation and thus for the Faroese kitchen. For centuries the grassy treeless landscape has not been conducive to highly advanced agriculture. Grain cultivation was difficult - it is said that on average grain harvest failed every three years. To a certain extent the Faroese have always been dependent on grain imports, and in the former half of the 20th century the hope of grain cultivation was finally abandoned. Instead, potatoes were a solid crop after its introduction in the early 19th century. Along with sporadic cultivation of beets and imported grain, the potato became a basic staple in the Faroese kitchen.

On the stamp‘s left hand side four hares have been hung up for curing.  The hare is the only land mammal hunted by the Faroese. It was introduced in the middle of the 19th century, with its hunting in mind – and hares can now be found on most islands. The hare‘s reproductive cycle makes it suitable for hunting. They breed three times a year - and it is estimated that each year approximately 7,000 hares are shot.

Beside the hares there are four “grindalykkjur”, meat strips of pilot whale suspended to be dried by the wind. The pilot whale has always been of decisive significance as a source of meat in the Faroe Islands. In addition to being eaten fresh, cooked with whale blubber, “grind” has also been salted and dried. In a wilted state (semi-dry and slightly fermented) it can be boiled. This is especially true of meat of inferior quality, ribs, shoulder blades, etc. The wind-dried strips depicted on the stamp are eaten with whale blubber, which has either been dried or pickle salted –recognized, moreover, as a delicacy.

The stamp also depicts “greipur”, which consists of wind-dried fish. Fishes are tied together in pairs, called “greipa“, and then hung up in „hjallurin“ for drying. At first a certain maturation and fermentation of the fish takes place, lending it a strong flavour. In this first stage the product is called “ræstur fiskur”, fermented fish which is served cooked. Fat of either dried or salted whale blubber is used with the fish called ”sperðil”, a sausage made of sheep‘s tallow in a bowel, or ”garnatálg” which consists of cleansed fermented sheep intestines. The intestines have been cured, then ground and mixed with fresh sheep‘s tallow. The result is a very strong-tasting tallow which is melted and poured over the dried fish and potatoes.

If the fish is left suspended for a longer period of time, it dries up, becomes very hard and should be beaten tender before eating. Dry or pickle-salted whale blubber or butter, and potatoes, are served with the fish.

We will not dwell on the numerous varieties of dishes that can be prepared from mørur, only name a few.

“Tálgalivur” is sheep‘s liver filled with mutton tallow, most often with onions and peppers. “Blóðmørur” is a kind of blood sausage with blood, flour, tallow, and sometimes raisins in cleansed sheep stomachs. The tallow and sheep stomachs are depicted in the bowl in the centre of the picture.

Other examples indicating that everything can be exploited to the utmost are the cod heads just above the bowl. If they are large enough, fish heads make for excellent dining. They can also be cut to “kjálkar”, fish cheeks fried or boiled fresh or salted, and “lippur”, gills consisting of the tongue and the fatty meat under the chin.

A few guillemots hang beside the “mørur”. Traditionally, seabirds of various species have also been a part of the Faroe kitchen. Guillemots, razorbills, puffins and fulmars are the most common - and on the island of Mykines gannet is also a prized for its taste. The availability of birds is limited and varies with time. The hunting of birds is subject to very strict preservation regulations.

When sheep are slaughtered in the fall, almost all carcasses are hung to mature and dry. At first time a certain fermentation takes place, just like with the fish, but there are three stages in the drying process. After Christmas, the meat reaches a stage where it is called “ræst”, i.e. fermented and semi-dry. “Ræst” meat has a distinctive strong flavour (and odour). It is a highly valued delicacy, served fried or boiled, also providing for a great soup.

After having hung for a few more months, the meat is dry and eaten without further preparation. Dried sheep meat is used as cold cuts on brown bread or the traditional “drýlur” (unfermented bread). Most dried meat is eaten at this stage, but if it hangs to dry for a year, it becomes “skerpikjøt” which is drier and harder than regular dried meat.

These three phases of the drying process for mutton, “ræst kjøt”, “turt kjøt” and “skerpikjøt”, are by most Faroese considered to result in the finest delicacies in the traditional Faroese kitchen. Recent years have seen changes in the traditional serving methods and preparation of Faroese specialties. Star chefs have experimented with food, combined it in creative ways and with non-traditional garnish. This has given rise to a large selection of brand new tasting experiences, which even appeals to people outside the Faroes. The gourmet restaurant “Koks” in Torshavn is well known for its successful fusion cuisine and gourmet artistry with cured raw materials.

It should be added that these cured and dried foods can only be produced thanks to the Faroe high and very salty air humidity, which prevents the food from rotting.