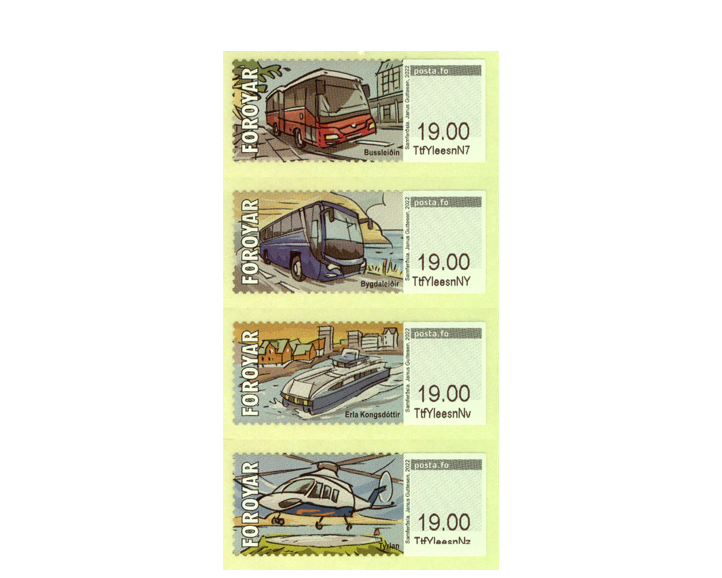 The franking labels illustrate a red city bus, a blue regional bus, the passenger ferry 'Erla Kongsdóttir' and a helicopter.

The era of the ferries
After the abolition of the royal monopoly in 1856 - and the transition from a medieval peasant society to a modern fishing nation had begun, the need for better transport options arose in the Faroe Islands. There was call for a combined cargo and passenger ship was that could sail the coasts of the Faroe Islands.
After ten years of tug-of-war with the Parliament to provide a public coastal freight and passenger service, the management of the Faroe Islands’ largest company, A / S J. Mortensens Eftf. lost patience. They simply had a steamship built in Sweden and had it delivered to the Faroes in December 1895. The ship was named Smiril - and in January 1896 it started sailing regular routes between Tvøroyri, serving the communities in Suðuroy, and Tórshavn, serving the larger communities in the rest of the country.
When A / S J. Mortensens Eftf. had shown that investing  in coastal sailing in the Faroe Islands was profitable, other private players immediately joined the fray - and soon small cargo and passenger ships were sailing between the islands.
The country’s coastal ships
In 1917, the Faroese County Municipality took over the operation of Smiril and founded the public coastal shipping company ‘Strandfaraskip Landsins’, popularly called Strandferðslan. For many years, Strandferðslan’s official actvitities only covered the operation of Smiril - but gradually this public shipping company took over the unprofitable routes, while private players continued operating the profitable ones.
In the sixties and seventies, Strandferðslan took over all the ferry routes in the Faroe Islands. The aging fleet was constantly being replaced and renewed - and the youngest sprout on the trunk was the small catamaran ferry ‘Erla Kongsdóttir’, which is the motif on one of the franking labels. Erla Kongsdóttir served as a replacement ship being deployed when one of the active small ships needed to be inspected and repaired.
The era of the tunnels
The first automobile came to the Faroe Islands in the early twenties - and could not drive very far off Tórshavn’s small streets. There were simply no significant country roads. Soon others followed, especially buses and small trucks - and primitive road networks were gradually being developed. Private bus routes were established in connection with the ships’ ports of call, carrying passengers and light cargo to the neighbouring towns and villages.
In the fifties and sixties, many of these local roads were connected - and in the early seventies, a more systematic overhaul of the overall road network began, significantly improving the overall standard.
The big breakthrough came when the two largest islands, Streymoy and Eysturoy, were connected by a bridge. A long tunnel was built through the mountain over the bridge in Norðskáli on the west side of Eysturoy, ending in the valley on the far side of Skálafjørður -  thus significantly reducing the distance to Skálafjørður, Eysturoy’s eastern towns and villages and the northernmost islands.
A few years later, a tunnel was opened between Kaldbaksbotnur and Kollafjørður, which further reduced the distance - and made the old and rather unsafe mountain road from Tórshavn superfluous.
The next major breakthrough came with the construction of the extensive underwater tunnels, first between Streymoy and Vágar and later between Leirvík on Eysturoy and Klaksvík on Borðoy.  These large and complex underwater constructions may seem a little overwhelming, but the investments have actually made four expensive ferry routes superfluous.
In 2020, the third and longest underwater tunnel was added, connecting Skálafjørður directly with the capital area. The function of this tunnel is to further shorten the travel distance between Tórshavn, Skálafjørður and the northern islands. At the time of writing, drilling is still in progress under the seabed between Streymoy and Sandoy. Once that project is over, drilling of the final tunnel under the seabed from Sandoy to Suðuroy will begin. When completed, it will be possible to drive from  Sumba, the southernmost village in the Faroe Islands, to the northernmost Viðareiði - without ever having to board a ferry on the way.
The era of the buses
In 1980, the public bus company ‘Bygdaleiðir’ was founded and actual bus routes established. Bygdaleiðir was later taken over by Strandferðslan. This has made it considerably easier to travel overland by bus, especially on the long routes between Tórshavn and Vágar Airport, or between Klaksvík and Tórshavn. Bygdaleiðir is represented by the blue bus depicted on the franking label.
The red bus, on the other hand, is one of the city buses in Tórshavn. These buses are operated by the municipal company ‘Bussleiðin’, which was established in 1979. In the seventies, the capital grew - and it became necessary to establish public bus transport in the city, foresightful move which was made at the right time. Since the day these iconic red buses started rolling out for the first time, Tórshavn has more than doubled in size.
In 1980, Strandferðslan also expanded its business with a helicopter route. You could now get to the central destinations significantly faster - but, more importantly, the small and often inaccessible outlying islands have a much more stable connection with the main population areas than when there were only scheduled ferries to rely on.
In 1994, the helicopter services was taken over by the Faroese airline Atlantic Airways, which maintains regular scheduled flights to the islands, and takes care of emergency ambulance transport when the need arises.
Anker Eli Petersen
Available formats