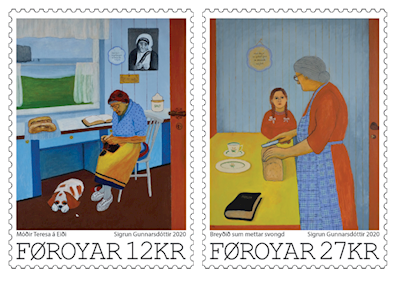 Sigrun Gunnarsdóttir has developed her own highly distinctive artistic universe as a professional artist.

Art by Sigrun Gunnarsdóttir
The artist Sigrun Gunnarsdóttir was born in 1950 in the village of Eiði in the Faroe Islands. This is where she grew up and where her interest in the visual  arts began in childhood. In Eiði, she has also developed her own highly distinctive artistic universe as a professional artist.

Sigrun Gunnarsdóttir's paintings are simple yet complex at the same time. They interact with us in hushed tones, prompting us reflect. She works with themes that occupy the lives of ordinary people, asking a plethora of existential questions. Sigrun's motifs have their origins, among other things, in adventures and legends, in intergenerational communication, in Greenland and in familiar, personal stories.

Her first works show clearly that she fully masters a naturalistic painting style, but in the mid-90s she diverged into an artistic universe of symbols with a more straightfoward expression which may also have surrealistic undertones. Ever since that time, she has been developing a distinctive pictographic universe. She turns aside from the subject in front of her and the painting evolves from her own thought processes.

Since childhood Sigrun Gunnarsdóttir has been interested in drawing. Growing up to witness the work and hear accounts of her grandfather, Niels Kruse (1871-1953), the first landscape artist in the Faroe Islands, was of great importance in her life. Sigrun always knew that she wanted to become an artist, and in her artistic endeavours she enjoyed support from home. In 1971, at the age of 21, she moved to Copenhagen to attend the Glyptoteket Drawing School (1971-73) with Robert Askou Jensen as her teacher. He encouraged his pupil to apply to the Royal Danish Academy of Fine Arts. She was admitted and studied at the Academy in the period 1973-1980. Her professors were, among others, Wilhelm Freddie and Sven Dalsgaard. In 1980 Sigrun settled in Eiði, where her studio is now based.

In her career, Sigrun Gunnarsdóttir has had a wide variety of solo and group art exhibitions. Her pictures have been widely exhibited, and in addition to art exhibitions in the Nordic countries, she has for instance exhibited in the T.A.G. Gallery in New York, Sunshine International Museum in Beijing and the JARFO Art Gallery in Kyoto. In 2018 she had her first backward-looking exhibition in the Art Museum of the Faroe Islands. In addition, she has created decorative objects for churches and public buildings in the Faroe Islands.

Two Portraits of Mothers
The first stamp motif features Mother Teresa at Eiði (2019). We see an old woman seated with her knitwear. She is wearing everyday clothes, and on the table in front of her we see two “drýlar” -  loaves of newly baked unleavened Faroese bread -  and a Bible. You can almost smell the freshly baked bread, hear the knitting needles rattle and the soft whispering of the knitted woolen footwear across the floor. A lovable dog lies at her feet; on the wall we see a picture of Mother Teresa and the kitchen window offers a wonderful scenic view. This is a time- and place-specific painting from a certain kitchen at Yviri í Gjógv in Eiði, distinctly showing the view of Risin and Kellingin (the Giant and the Hag, two sea stacks close to Eiði). This is actually a portrait of a real woman known by everyone in the village.

The second stamp motif invites us into an old woman's comfy kitchen. The woman seems assured, she has big and strong arms and hands. She is wearing an apron and is in the process of giving her grandchild a piece of bread. We look at the grandmother's cheek as she turns towards the grandchild. At the centre is the strong bond between the two. A black Bible rests prominently on the bright yellow table in the foreground, and on the far right behind the woman we see contours of an open door visibly framing the painting, just as happens in the first painting. In spite of the wealth of various items in the paintings, everything seems remarkably balanced. The composition and the large color surfaces are serenely poised, and the muted blue color in different shades blends foreground and background, collecting the images. Everything tends to underscore a calm, safe atmosphere.

Old women constitute the main theme in Sigrun Gunnarsdóttir's art. She has painted several different versions of them for almost two decades. Here, Sigrun has painted her mother and grandmother, but the precise and simple expression indicates that the motif is also of general human significance - a portrayal of an archetype which resonates all over the world. The wise and caring mother, steeled by the struggles of life, is confident in her belief of a greater meaning and context in life. A veritable counter-image of today's self-centered individualism.

The motif of the artist's mother is well known. In Faroese art history we have examples such as Painting of my Mother by Sámal Joensen-Mikines 1934, Portrait of my Mother, ca. 1955 by Ruth Smith, My Mother, by Ingálvur av Reyni 1971, and The Artist's Mother,  by Zacharias Heinesen 1992. All of these paintings have in common heartfelt, expressive and naturalistic observations while intently exploring form and color. Sigrun Gunnarsdóttir makes a rather different contribution to Faroese art history, and her style is simple - naivistic if you will - and symbolic.

Sigrun Gunnarsdóttir's paintings tell stories. In addition to the motifs, she builds images of symbols, quotes and other edifying everyday things. One of Sigrun’s hallmarks is her penchant of starting with Christianity. We recognize her symbols because they migrate from one painting to the next, and whether the symbols originate from Christianity or are of a more general nature, the context lends them its meaning - in close interaction with the viewer, as a matter of course. As an example, we may note the door pointing to the transition from mortal life to an unseen world on the other side of the door,  reminding us that these old women nearing the end of their earthly life. If you look closely at the first painting, you see a tiny bird resting on the floor between the woman, her dog watching the bird silently. It does nothing of itself, calls for no special attention but is just as important as the rest.

Like an echo of the quotation in the picture of Mother Teresa on the wall: "Be faithful in small things because it is in them that your strength lies." And last but not least, we notice the loaves of bread. In Christianity the bread represents, among other things, the body of Jesus, both for sharing and for material and spiritual food, just as says in the Lord’s prayer "give us today our daily bread."

Sigrun Gunnarsdóttir's work deals with the lives of ordinary human beings, and in this context the bread can simply represent something as basic as the need for spiritual food common to all human beings. The second painting is called Bread which satiates hunger (2014). Here we perceive the proximity of the generations which the painting conveys. The painting questions our reminiscences, what it feel like to be at home and what the soft voice can engender.