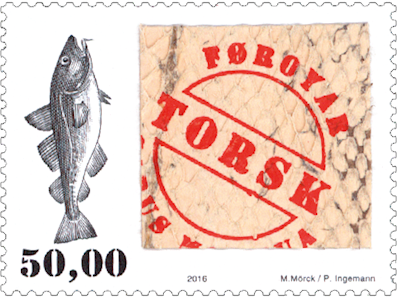 Once in a while assignments end on my desk that prove to be a real eye-opener. These are creative works of art so unusual and yet so obvious that you smile, scratch your head in amazement and exclaim: "Of course! Why did not I think of that before? "

I had such an experience the other day when Posta turned to me and asked if I could write a small article about their new stamp, which - and here my eyes opened wide - is made from cod skin.

"Cod skins," I thought, "how on earth does such a work of art look like?"

My faint scepticism was quickly put to shame when I saw the stamps. They were in principle designed as ordinary stamp with texts, values and a small shaded drawing by master engraver Martin Mörck. But the similarity stopped right there. Onto each stamp a square piece of tanned cod skin had been glued. It was not at all grey and dullish, which I to my embarrassment must admit was my initial fear - but incredibly beautiful and patterned with almost metallic colour tones, which change depending on the angle it is viewed from. By looking at several examples I was able to ascertain that they are all different - something the Philatelic Department makes every effort to avoid.

Whatever the case, in September Posta will issue beautiful stamps with skin of cod caught in Faroese waters, supplied by fish exporter Nevið in Runavík, tanned by Atlantic Leather in Iceland and printed by Cartor in France.

The Atlantic cod (Gadus morhua) is usually about one meter in length, but can grow to 2 meters and weigh up to 96 kilos. It can reach an age of 25 years and is found on both sides of the Atlantic, from Novaya Zemlya in the Barent Sea, Spitsbergen and Jan Mayen down to the Bay of Biscay, in the North Sea and the Baltic Sea to the east. It is commonly found in the waters around the Faroe Islands and Iceland, as well as Greenland - and from Labrador in the north to North Carolina in the south.

Cod is generally sandy brown, its back and sides are yellowish-green, with grey or brown spots and a white lateral stripe running along its sides. The belly is white or greyish-white. However, it can have other colour variations depending on habitat, f. ex. dark brown or maroon if it lives among kelp.

Cod is popular for its delicate flesh. This is especially true of Faroese cod, which is fatter and not as mealy or dry as cod in other places.

Tanning of fish skin an ancient art although it has not been common in the post-war period. The quality of fish leather will of course vary from species to species, but properly treated skin of cod, salmon and lumpfish is often stronger than ordinary cowhide.

The size of fish skins have made them especially well-suited for producing smaller items, such as  shoes, bags, purses and watchbands. Sewn together, they can also be used in the garment industry and to upholster furniture. Today's designers are getting more and more aware of fish skins‘ practicality and beauty - and use them, in addition to the items mentioned above, for a number of few articles, f. ex. jewellery, belts, book binding and photo collages.

There is a growing tendency to make the fullest use of fish being caught which means that in the coming decades we will no doubt see an increased use of fish skin for various purposes. It will not be limited to tanning of fish skin, but will occur over a broader spectrum - in the industrial production of fish gelatine, which can be used both in the food industry, as well as in advanced technology such as electronics and optics. In addition, fish skin protein can be used in the nutrition industry and as health food.

The uses of the Faroe most abundant material, fish, can only be limited by our imagination. And right now Posta strikes a blow for the forgotten treasure found in the versatile uses of fish products by issuing unique stamps with the most fascinating cod skin patterns.