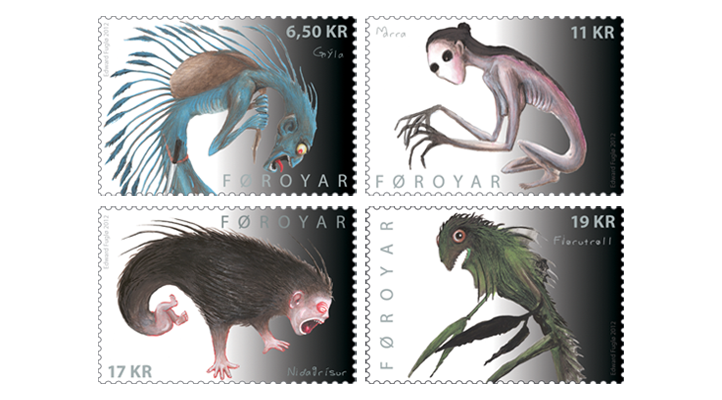 The bogeyman, the mare, the murdered child as a ghost and the beach troll

The old folklore often deals with issues on the borders between the known universe and a threatening outher world which people feared - or between right and wrong, defined by secular regulation and laws or by common tradition.

The conceptions about the ”Niðagrísur” (The Child Ghost) derive from a serious crime. The fact that the ”Grýla” (The Monster) goes for the children, derives from the need to observe ecclesiastical orders. The Beach Trolls keep the children away from the beach and thereby great danger – and the conceptions about the Mare is a symtom of physical and mental stress, which most people experience during their lifetime.

The bogeyman – scary disguise
Celebrations involving dressing up in various disguises are a feature of cultures throughout the world,  including Denmark. Among the celebrations with the richest traditions are various kinds of carnivals in connection with Shrovetide. On the Faroe Islands, children dress up in festive costumes and wear imaginative masks, after which they visit friends and family who typically give them treats or loose change. A kind of game, it is called to "walk like bogeymen" ("gå som grýla" in Faroese). This creature is otherwise known from folk beliefs to wander around ensuring that no children eat meat during the fast. A presumably ancient rhyme about this creature has survived. It carries a sack, into which it puts the children who have been so reckless as to breach the strict directive about fasting between Shrovetide and Easter, which we know from Catholic countries, for example.

A legend speaks of the filthy rich Gæsa, who owned half of the island Streymoy but was caught eating meat during the fast, for which he was sentenced to relinquish all of his earthly possessions.

This Catholic custom – both the carnival and probably also the fast – is widespread. The Rio Carnival is famous and has evolved into a huge tourist magnet. In most of the Southern European countries, Shrovetide is also celebrated with big carnivals and somewhat wild shenanigans.

An unavoidable consequence of our time is the commercialisation of popular customs. A significant amount of money is spent and made in connection with carnivals, and not least the media is eager to televise the colourful and spectacular parades in the streets of Rio and other cities.  Another consequence of our time is the Anglo-Saxon influence. These days, the traditional masquerade at Shrovetide is being replaced by the Anglo-American Halloween, which originated as a Gaelic festival of light among carnival-like masquerades. It is interesting to note how this custom has gained ground in our Nordic culture without people giving much thought to the fact that similar celebratory customs have existed in our culture since the dawn of time. Perhaps it is also due to late autumn being a time for festivities and fun. Halloween is celebrated on 1 November , after all, while Shrovetide takes place in the spring and has to compete with the onset of the many summer activities.

The mare
The mare appears at night and sits or lies on sleeping people, disturbing their sleep, causing evil dreams, and suppressing their breathing. It often appears in the guise of a beautiful woman – but is in fact an abominable monster. It wants to stick its fingers into the sleeper’s mouth in order to count the teeth. If it succeeds, the sleeping individual will die.

Most people sleep badly from time to time and may experience chest tightness, be unable to exhale freely and have nightmares at night. There are many possible causes of disturbed sleep without sufficient rest: illness and worries are often the cause of disturbed sleep in the same way as overeating or eating something wrong can lead to those types of symptoms. Natural causes of these kinds have presumably given rise to the superstitious beliefs surrounding the mare.

We know of many good pieces of advice involving the mare. One could recite certain, often ritualistic verses or rhymes which were considered capable of keeping the mare away. One piece of advice was to wrap a knife in a cloth, or preferably a garter, and then move it around the person who feared the mare by letting it go from one hand to the other while reciting a mare verse. In a few places, it is advised to place one’s shoes in front of the bed with toes pointing outwards, as this will prevent the mare from getting into the bed.

The belief in a mare or similar creature features in all cultures, supposedly because disturbed sleep is a universal human phenomenon. In many places, people believed that some individuals were capable of transforming themselves into a mare in order to hurt their enemies. Mare stories with obvious sexual connotations also occur. These usually involve a mare in the guise of a woman who seeks out sleeping men, and, conversely, a male form who looks for sleeping women.

The belief in a mare has been strong in many cultures. The oldest Nordic Christian laws include fines for people who take on the form of a mare and seek out others in their homes.

The mare often appears in the form of a woman flying through the air. We therefore sometimes see a correlation with superstitious beliefs about witches. Indeed, it is believed that women flew to Bloksbjerg on broomsticks in order to indulge in wild excesses together with Satan. There is no original connection between these two popular beliefs.

Scarcely anyone living in our part of the world today believes in the mare, and yet we have preserved it in our language. We talk of having nightmares following a night of unsettling dreams and we refer to a problem that has proven to be difficult to solve as a mare .

The murdered child as a ghost
A common notion in folk beliefs is that when certain people die they are transformed into one animal form or another and can appear as ghosts. On the Faroe Islands and in many other places, there is thus the belief that children concealed at birth and murdered come back to haunt and show themselves to the living in one form or another. If we are to believe the Faroese belief, this ghost is small and chubby, bears a likeness to a child, and is no larger than a ball of yarn. The most common explanation for why they come back to haunt is that they want to have a name because they died without being christened.

A name is meaningful and to not have a name is an unhappy state of being. When a newborn baby is christened and given a name, it is also given its own place in the family and in society. It becomes a person. The name stays with that individual throughout his or her life and is entered into official registers, even after death, as proof that this person really did live. The little child murdered at birth is never given a place in life; it is not registered and no one ever becomes aware of its existence.  It is unwanted and silently pushed away.

Should the unhappy child succeed in getting a name, its apparition will also disappear, never to be seen again. In Faroeses, this ghost is called a “niðagrísur”, which refers in part to it not having achieved a blessed life (niða means in the opposite direction of the blessed life) and in part to an animalistic form (grísur means pig) because it never became a person. Some researchers believe that this ghost originates from the time before Christ, specifically because what matters is the name and not the ritual of a church christening as a sacrament.

Near the village of Skála on the Faroe Islands, there is a boulder called Loddasasteinur (Lodda’s Boulder) . It was often possible to meet the ghost of a murdered child here. A man from the village once became so irritated when he came upon it that he shouted: “What a loddas!” No one has ever seen the ghost since. It was believed that it perceived the expression to be its name and thus found peace. (Incidentally, the meaning of the word ‘loddas’ is unclear.)

In the village of Virðareiði , a housemaid gave birth to a child in secret. She wrapped it in leg warmers and buried it. When the girl later married, the child turned up at the wedding as a ghost in the leg warmers, where it rolled around between the legs of the guests and sang a song about its cruel fate.

The beach troll
In the old days, people believed in trolls. They lived beyond the human domain in poorly accessible and impassable areas high up on the fells or deep in the mountains. The world of trolls was dark and scary and they belonged to the heathen world. They were dangerous and menacing.

There were many stories and legends about trolls, although opinions differ as to whether people genuinely believed in their existence. Many researchers believe that stories about dangerous trolls served a pedagogic purpose primarily and were intended to make children, and perhaps also a few adults, afraid of seeking out perilous places – especially in the dark.

A famous legend tells the story of a troll, who, at dusk one evening succeeded in abducting one of the children from the village of Hattarvík on Fugloy. An old man leapt after the troll and managed to save the child from the edge of the cliff down by the sea. The troll jumped into the sea and thus became known as a beach troll. The same village is the centre of another story about a beach troll, who could often be witnessed coming onto land at dusk. The troll is said to have been terrifying. Seaweed grew and pebbles hung all over its body. When it moved it sounded as if it was dragging millstones behind it and the ground came loose and spun around it. It was so large that it could be seen above the tallest houses. A man eventually succeeded in exorcising it, and no one has seen or heard from it since.

In the village of Hattarvík, the cliff facing the sea is quite steep in places, the beach below is narrow, and the surf is often rough. One can therefore easily imagine the adults worrying about their children and envisage them having reasons for scaring them into staying away from the dangers lurking down by the beach.