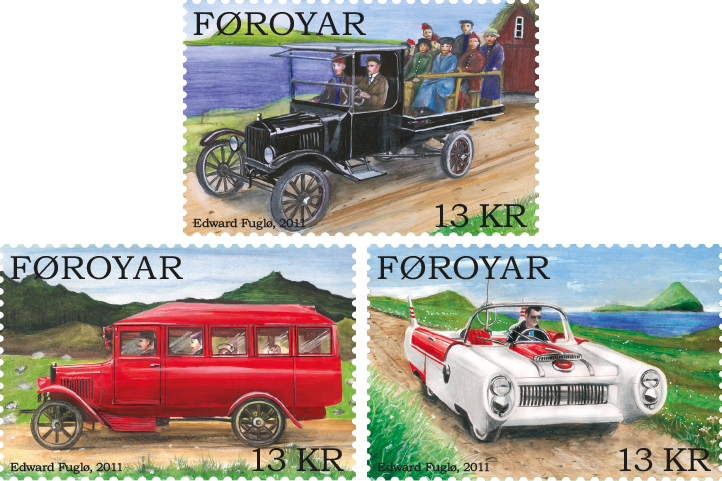 Each vintage car has its own story

Vintage cars
Each vintage car featured on our stamps has its own unique story. The black lorry was the first vehicle to arrive in the Faroe Islands in 1922. The red bus that operated between Vestmanna, Kvívík and Kollafjørður was converted from a tanker and the home-made ‘De Luxe Model’ on the third stamp was the first car on the island to have a cassette player and loudspeakers.
The first car on the Faroe Islands
The first car arrived on the island on 6 May 1922 when Johannes Olsen and Júst Sivertsen from Tórshavn bought a Ford TT truck from Wenzel Petersen and Vilhelm Nielsen, who had a forge in Quillingsgård in Tórshavn.
The car was ferried to the Faroe Islands on the DFDS vessel S/S Island. As the ship was unable to dock, the car was hoisted onto a yacht, which unloaded the cargo at Kongebro marina in Tórshavn.
The car caused a sensation when it arrived in Tórshavn because the islanders had never seen a car before. The Faroe Islands had horse-drawn carriages at the time, although not many. Arthur Brend, however, was the first to own a ‘motorised’ vehicle on the island. In the autumn of 1921 he purchased a motorbike, which received a great deal of press in the local newspapers at the time.
Back in 1922, nobody on the quayside knew how to drive a car. It was therefore pushed up to the forge in Quillingsgård. A few days later the newspapers were able to report that the car had made several journeys between Tórshavn and the sanatorium in Hoydalar.
Morris Commercial Cars Ltd.England Model 1929
This commercial vehicle arrived in Kvívík on 14 June 1934. Originally from Hillerød’s Police District and owned by Nordsjællands Benzin Co., it had been without licence plates for several years. When the vehicle arrived on the island it had no body, i.e. the cab and hood were normal but there was no load or cab on the vehicle.
The plan was to take the cab from the Chevrolet bus in service at the time and fit it onto the vehicle’s chassis. The vehicle had functioned as a tanker in Zealand and as a lorry for a time.
However, these plans came to nothing, as Fritleif Johannesen from Tórshavn had heard about the vehicle and had travelled to Kvívík to take a closer look at it. His idea was to build a cab on top of the vehicle, i.e. an extension to the existing cab. He planned to build a so-called ‘omnibus’. His plans went ahead and on 12 June 1935 the vehicle was registered and approved as a mail and passenger bus between Vestmanna, Kvívík and Kollafjørður.
‘De Luxe Model’ built on the Faroe Islands
In the mid-1950s a home-made Faroese car drove through the streets of Tórshavn. It belonged to the Norwegian Almar Nordhaug, who built the car together with his colleagues at the barrel factory in Tórshavn.
It was not unusual to convert cars in the Faroe Islands in the mid-20th century, but the car they built at the factory was unique and far ahead of its time.
This was the first car on The Faroe Islands to have a cassette player and no fewer than four loudspeakers. The car generated quite a lot of attention when it attended horse shows because the music disturbed the horses and made the riders furious.
When Nordhaug moved back to Norway he took the car, which was on Faroese number plates, with him and continued to drive it in Norway for several years. Unfortunately, the car is no longer in existence. The last reliable report we had said that it was being used as part of a decorative display in a furniture store in Oslo.
Sources:“Postur í Føroyum”, Vilhelm Johannesen, 2000, “Bilar”, Magnus Gunnarsson, interview with Viggo Johannesen.
Available formats