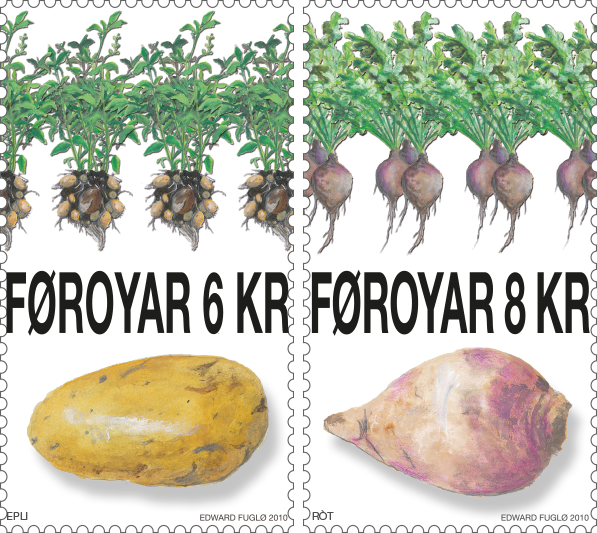 Potatoes and swedes - Set of mint

Root vegetables are an old food on the Faroe Islands and

much older than potatoes.

Root vegetables are an old food on the Faroe Islands and much older than potatoes, which did not become common until the mid-19th century. Two types of root vegetable were grown: Faroese turnips (Brassica napus) and Norwegian turnips (Brassica rapa), which used to be commonest. Faroese turnips grew down into the soil, so far down that a spade was needed to dig them up, whereas Norwegian turnips grew close to the surface and were easy to pick by hand. The place where root vegetables were grown was called the rótakál. Root vegetables were mainly used for soup, but also for bread, as well as being cooked for dinner together with poultry, for example.

Later on the Faroe Islanders also started growing other root vegetables such as kohlrabi, different turnip varieties and carrots, as the seeds were now available in the shops. From around 1920 there was a growing interest in kitchen gardens among the population, and people began cultivating various sorts of greens in addition to root vegetables. Before the arrival of potatoes, only root vegetables were served with dinner.

For one reason or another stealing root vegetables used to be very common. Therefore, people who grew root vegetables often tried to hide them by planting them among their potatoes so that the potato shoots would conceal the shoots of their root vegetables.

Kohlrabi, which is often called Faeroese turnip, is now available in the shops. It comes from foreign seed cultivated in the Faroe Islands, but the conditions mean that it does not grow as big and so has a much better flavour.

Potatoes made their first appearance in Denmark in 1719. As far as the Faroe Islands are concerned, we know that root vegetables were being grown in Torshavn in 1775 and 1799, but it was not until the mid-19th century that it became common to grow potatoes. Many people on the islands can remember Hans Marius Debes's story about the first potatoes arriving in Gjógv in 1835.

To begin with potatoes were cultivated in the same way as cereals and root vegetables, but people soon started earthing them up. They used a mattock or shovel to dig a furrow a foot deep, put fertiliser in the bottom and then planted the potatoes in it before creating a ridge. On Mykines it was long thought that potatoes could only be grown in the infield close to the village, where the weather was particularly good. This spot was called the Land of Canaan. No one tried growing them anywhere else and people who did not own land there ate more root vegetables than potatoes. This changed when people started growing turf, as it turned out that potatoes could actually be cultivated everywhere.

Some places were particularly well suited to earthing up potatoes, however, including Oyran in Sørvágur and the beach in Sandur, where earthing-up continued. The same piece of land was often cultivated every year, with cow manure or artificial fertiliser being used to enrich the soil.

The beach was so deep that it was possible to keep potatoes in what was called a potato pit until well into the spring. People would dig a square hole that was deep enough to be frost-free. To enable them to find the potato pit again, they drew a map of the piece of land and marked the pit. The potato pit did the same job as the turf potato clamps, which were more or less buried in the ground. Some people also kept potatoes in their cellars, but it had to be cool enough or the potatoes would start to sprout prematurely.

Potato cultivation on the Faroe Islands only really got going after a man from Miðvágur on Vágar discovered a new growing method. The potatoes were grown under turf that had been turned upside down, i.e. with the grass facing down. This method of growing potatoes was also called Vágaveltan. It was a very easy way to grow potatoes. They were placed on a narrow strip of grass, then the turf was laid on top, grass to grass, with the soil facing up. This is now the commonest method of growing potatoes, with just a single handful of artificial fertiliser being used between each potato plant.

After 1925, and in the lean thirties in particular, potatoes became very important in Faroese households and dinner was not dinner unless it included potatoes.

So many potatoes were grown in some villages that they could be sold to other villages, which is what happened in Sandur, among other places. In the village of Tvøroyri, for example, there were many people who did not own land and so had no choice but to buy potatoes. These days most people buy imported potatoes in the shops because it is easier, but many people still enjoy growing their own potatoes, which taste much better than the shop-bought variety of course.