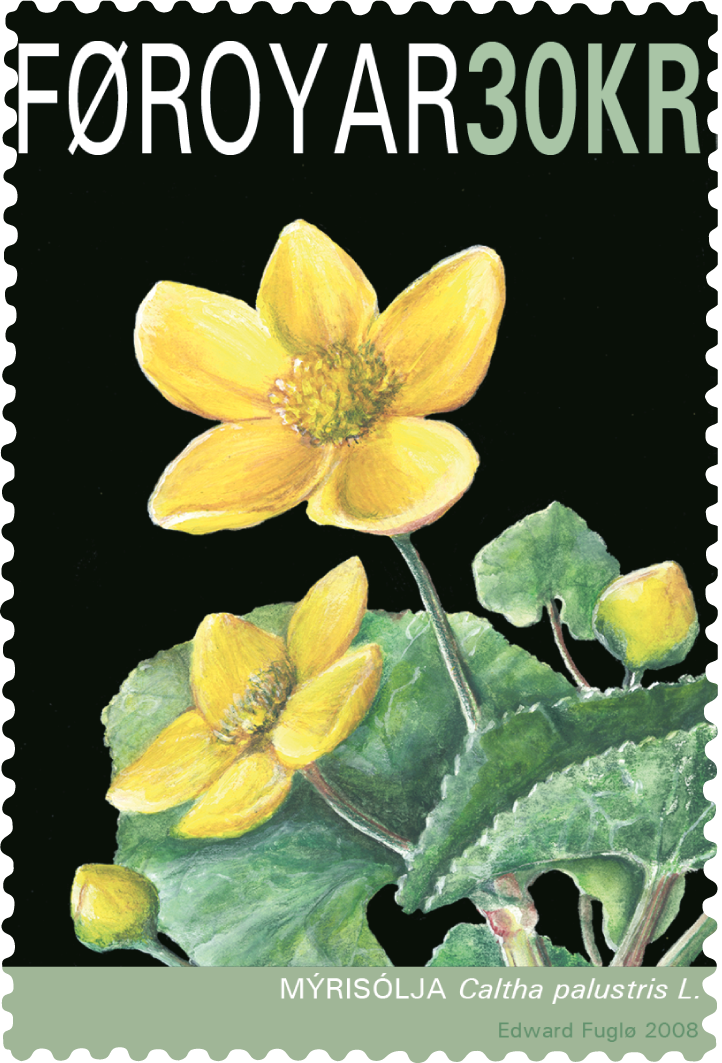 In 2005 the Marsh Marigold became the national flower of the Faroe Islands.

The marsh marigold, the national flower of the Faroes

The marsh marigold is the most prominent flower in the lowlands and the harbinger of spring.
In the words of the song ”Sóljugentan” about a little girl who has picked a bouquet of these flowers, the marsh marigold, ”sóljan”, is the first greeting from the spring. It grows in large groups and is therefore very striking in the landscape. There can be few people who would not be delighted at the sight of them. Tales of the marsh marigold can be found in many places in literature – both in poems and songs. It has also played an important part in children’s games. Whistles can be made from the stalks as related in the song of the little brother who must not cry, but blow on the whistle instead, a whistle made from the stalk of a marsh marigold.

The scientific Faeroese name is ”Mýrisólja”, Caltha palustris L. in Latin. The first part of the name indicates that the plant grows in damp areas, while the second means ”sun eye”. In Faroese, it is therefore usually called ”sólja” or ”sóleyga”. It is a perennial that belongs to the buttercup family (Ranunculaceae) and can be distinguished from the creeping buttercup and the lesser spearwort by its greater robustness, its characteristic, kidney-shaped leaves and big yellow flowers.

The marsh marigold was common on all of the islands about 10,000 years ago during the preboreal period, but almost disappeared because it was destroyed permanently in the Faroes during the 7th to 9th centuries. The entire plant is poisonous and is therefore left in peace by horses, who become sick if they eat it. But the large leaves of the marsh marigold are especially popular with sheep and cows so it disappears in the places where these animals can get to it. After the colonisation, this was particularly the case where it was not protected against grazing.

The Faroes’ mild, oceanic climate with its warm winters means that sheep can be out of doors all year round, but they are kept out of the home fields from 15 May to 20 October so that the grass can grow unmolested and later be used as hay or silage. If the sheep were allowed into the home fields throughout the year, the marsh marigold would probably die out according to ”Studies in the vegetational history of the Faroe and Shetland Islands” by Jóhannes Johansen.

The plant is common in the lowlands, but can also be found in the mountains in places inaccessible to sheep. The marsh marigold grows predominantly along the streams in the lowlands, but also grows in waterlogged fields. It flowers from May to the beginning of June and is widespread in many places around the world in the temperate and Arctic vegetation belt, both north and south of the Faroes.