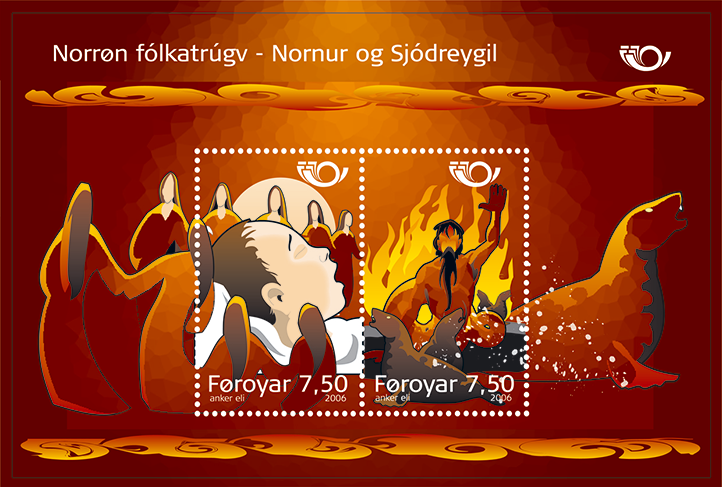 Folk Beliefs: the Absurd Ghost and the Faroese Norns

Folk Beliefs
Through the physical universe and the inscrutable nooks and corners of the subconscious mind, many a weird creature has emerged in the course of time.  These are the inhabitants of the world which we nowadays call the folklore.
Today we are astonished by these strange products of the folklore, and have some difficulties to imagine, that they once were a natural part of life, as real as the tangible world or our own religious notions.

The Absurd Ghost
One of the most absurd creatures in Norse folklore is the Faroese “Sjódreygil” or “Sjódreygur”.  The name means “Sea-Ghost”
He often appears on skerries after sunset, and howls and screams.  If a boat passes by, he calls upon the crew and asks them to take him with them.
The Sjódreygil appears in two different shapes.  Sometimes he looks like a man, and sometimes he looks like a dog.  He has a brownish hue and if spotted on land, fire seems to come from him.
Sjódreygil has only one leg or tail, but is capable of jumping on it.  People have seen the tracks from it in the snow.
If Sjódreygil meets a man on land, he will try to push him into the sea.  But if the man is accompanied by a dog, Sjódreygil will leave him alone.

Sometimes fishermen have allowed the Sjódreygil to enter their boat.  As long as it is dark, he can row for two men, and he is also good at finding the right spots for fishing.  But when the dawn arrives, he slowly fades away.
Some fishermen have tried to make the sign of the cross over him, but as the morning-redness grew stronger, he begged them to let him go.
Once a boat-crew would not let him go, but then he just faded away, and the only thing left of him was the cross bone.

Norns
We know from the Norse Mythology, that fate played a significant role in our ancestor’s life.  These notions were personified in the so called Norns – deities of the destiny, who, already at birth, decided people’s fate from the cradle to the grave.
Besides from the three superior Norns: Urd (the fate of the family and the past), Verdandi (the present and future fate) and Skuld (the inexorable fate/death), there were a waste number of less significant Norns.  These subordinate Norns were connected to the single individual or the family.

The Faroese Norns
On the , these notions seem to have lasted for a long time after the introduction of Christianity.  Several words and terms, which refer to Norns, have survived in the language until quite recently.

In the book “Dictionarium Færoense” from late eighteenth century, the author J. C. Svabo tells, that Norns were small, human-like beings, even smaller than vaettras.
There are no other direct references to these beings, neither with Svabo or any other author.  But it is clear that they have had some association with the families and have been present at childbirth, as we know it from other Norse sources.

The fact that the Norns seem to have been present at childbirth is made clear in another statement in Svabo’s book.  He tells that on the , they prepared a special meal called “Norna-greytur” (Norn-porridge) for the mother, just after she had given birth to the child.  When the mother had eaten, the porridge was served to the midwife and any other person who had been present during the birth.

Svabo also mentions, that the white spots, which sometimes appear on people’s nails were called “Nornaspor” (tracks of the Norns).  The spots can be an indication for sickness.

For more information about the Sjódreygil and the Norns, you can visit the thematic databases:
www.topoftheworld.nu and www.tjatsi.fo