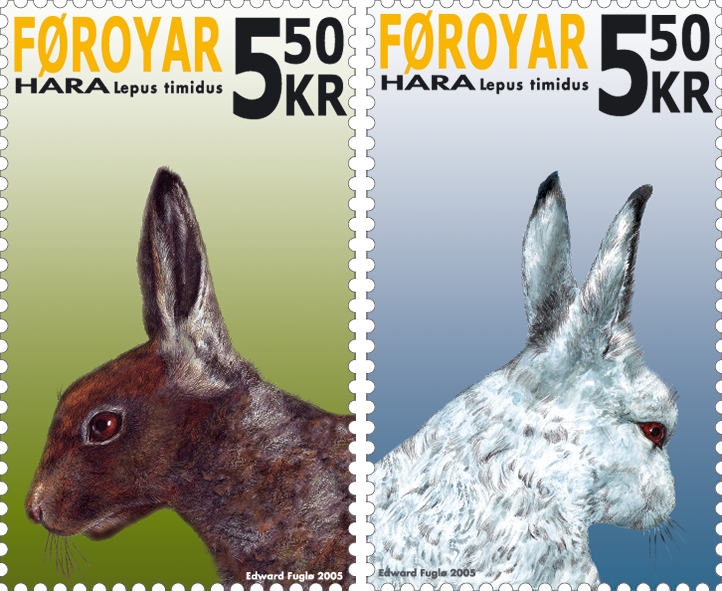 The Faroese Hare - Set of mint

Four snow hares from Kragerøen in the  fjord were introduced on the Faroes in August 1855 and released on the cliffs of Kirkjubøreyn west of Tórshavn.

Hares live in woods and on moors, and the female, called the doe, leaves her leverets hiding in hollows called forms between stones and rocks, while she searches for food. The Faroese “snow hare” (Lepus timidus) becomes greyish white in winter nowadays, and not snow white, like its ancestors who were introduced into the Faroes in 1855. The hares of today are “blue hares” like those in .

The original Canadian polar hare (Lepus arcticus) is found in . The biology of this species is similar to that of the northern European snow hare. Polar hares and snow hares are both 46-61 cm long and weigh 3.5-4.2 kg (about 4-9 lb). In they tend to be larger the further north they live. Both types have short, wide ears with black tips.

Polar hares turn completely white in the winter, but there are two varieties of snow hares. On the Faroes, in (including the Isles), and in , and southern there are blue hares with a greyish white winter coat. In the rest of their winter coat is snow white, while in the summer both varieties have brown or light greyish brown coats.

Hares are widespread in northern countries, but there are no hares in . Snow hares are found on the Faroes, in (and on the Isles), in and and in the , and they are common on many of the . Polar hares are found in northern coastal regions in and , but not around and in South east . Archaeologists have found remains of the bones of hares in the Northmen’s medieval settlements.

Breeding tests with snow hares and blue hares have revealed that genetically, the white winter coat is always dominant. Kragerøen in particular is a borderline area with snow hares high up on the cliffs and blue hares lower down. If just one of the original four hares had carried the blue hare genes, the result would not be seen before the third generation at the earliest. But then the blue hares had all the advantages on the Faroes in the mild Atlantic winters.

Blue hares on the Faroes drop leverets three times a year, but it is by no means certain that the leverets from all three litters will survive. Snow hares on the other hand only have two litters, and their coats turn white relatively early in the autumn, while the blue hare’s winter coat appears later. Where the snow does not often lie for long, a snow hare cannot hide as easily from hunters as a blue hare.

When snow hares were moved to an area with a coastal climate, the advantages of the white winter coat became disadvantages. This was why only 60 years passed before the dominant snow hares were completely exterminated and replaced by animals with the recessive blue hare genes. It is simply a textbook example of natural selection and adaptation to the environment.

Polar hares and snow hares live in the woods where they can – or on heather-covered moors close to the snow line. The hares feed on various plants, grasses and sedges, (Carex), roots and ferns, supplementing them with leaf and flower shoots from bushes and trees. Polar hares and snow hares are most active at dusk, but in the mating season the bucks can be seen pursuing the does in broad daylight as well.

The does are pregnant for about seven weeks. Polar hares and the snow hares with completely white winter coats that live farthest north only breed once a year. Further south they have two litters a year, while the blue hares drop three litters a year consisting of two or three leverets each. All the same, the weather conditions are seldom so favourable that all the leverets survive. Polar hares in have five to seven leverets, which reach sexual maturity at eight months old. In other words, they can start breeding themselves when they are a year old.

Polar hares and snow hares are hunted for their delicious meat. It has been estimated that the population of hares on the Faroes was at least five thousand in 1997. However, it is very difficult to obtain accurate figures for the number of hares shot on the Faroes each year, because this is the only country in where hunters are not obliged to obtain a game licence. Hares may be hunted on the Faroes from 2 November until 31 December.