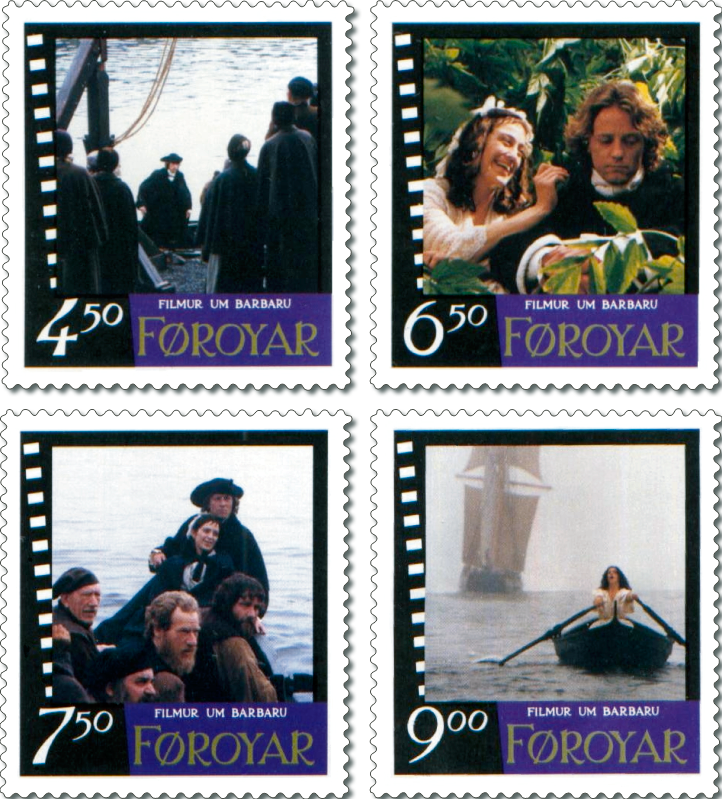 The Film Barbara - Set of mint

Barbara - the film
In October 1997 we will see the opening of Danish director Nils Malmros' screen version of Barbara, the famous novel by Faroese author Jørgen-Frantz Jacobsen. The story takes place in the Faroe Islands in an 18th century setting which the film crew has successfully re-created in the narrow alleys between low turf-thatched wooden houses in the old part of Tórshavn on Tinganes and other locations such as Hoyvik, Saksun and Koltur.
Studio shooting started in Stockholm in June 1996 and outdoor shooting was carried out in the Faroe Islands during the summer months. The final shooting was carried out in Copenhagen in the autumn of 1996. With a budget of DKK 38 millions it is the most expensive Danish film produced so far. Apart from the Danish investment, Swedish and Norwegian funds have also been invested in the project. Producer Per Holst has produced the last four films by Malmros.
Briefly put, the plot of the novel - and the film - is as follows: The schooner 'Fortuna' brings the newly graduated Danish theologian Poul Aggersø to the Faroe Islands to serve as priest on the island of Vágar. Fate has it that Mr. Poul meets and marries Barbara, the vivacious young widow of a priest who has a reputation for being a bird of ill omen. However, their erotic joy is short-lived and Barbara's larger-than-life infatuation reaches beyond the anaemic priest. Mr. Poul is filled with anxiety and the fear of losing his Barbara. When, in his official capacity, he pays a visit to the almost inaccessible island of Mykines and, due to a storm, has to remain there for eleven days, he feels that Barbara is slipping away from him.
And indeed, on his homecoming he finds the vicarage empty. Barbara has left for Tórshavn with the young student Andreas Heyde. In his misery he pursues them, loses his humanity and ends up in prison. Barbara also finds her new-found happiness to be fickle. Andreas Heyde quickly loses interest in her and leaves in secrecy on the Fortuna. The conclusion of the novel focuses on Barbara's painful defeat.
Jørgen-Frantz Jacobsen's narrative style is filled with humour and gusto. Fine points and precise historical observations gives his work energy and substance.
The leading role of the beautiful Barbara is played by Norwegian actress Annike van der Lippe. Another Norwegian, Trond Høvik, plays the part of the tormented victim of jealousy, the uncouth shop assistant Gabriel. The other leading role, the newly graduated priest Mr. Poul, is played by the Danish actor Lars Simonsen. Other central roles are also played by Danish actors, among others Jesper Christensen, Waage Sandø, Jens Okking, Birgithe Federspiel and Bodil Udsen.
For a large part of 1996 the recruitment of extras influenced street life. It was impossible not to notice the many full beards and wild hair styles. Good-natured and anonymous parish clerks, dental surgeons, lorry drivers and shepherds had so much hair in their faces that their own families had trouble recognising them. The shootings generally left their high-spirited and picturesque mark on everyday life during these hectic summer months.
Jørgen-Frantz Jacobsen (1900-1938) of Tórshavn took an M.A in History and French at the University of Copenhagen. He was deeply engrossed in Scandinavian history and as a journalist in Copenhagen produced a number of features and articles as well as two brilliant books on the political relations between the Faroe Islands and Norway and Denmark.
At only 21 he contracted pulmonary tuberculosis and had to spend long periods of his short life in sanatoria. Jørgen-Frantz Jacoben wanted to be a fiction writer and in 1934 he started his life's work - the historical novel Barbara. The novel, written in Danish and published the year after his death, received instant praise and was translated into many languages.
Jørgen-Frantz Jacobsen was a passionate letter writer and corresponded regularly with his friend and relative, the author William Heinesen (1900-1991), who was also a brilliant letter writer. In 1963 William Heinesen published a selection of letters of Jørgen-Frantz in his book Precious Life. One of the letters says: 'Life is large and demoniacal, worth loving and obeying. And again, the greatest thing in life is resignation. I have known this since during a stormy moment almost eight years ago I suddenly comprehended Beethoven's fifth symphony'. In the letters he refers to his apparently hopeless love for a woman whom he calls Barbara and his plans to write a novel which on the surface is based on the story of an 18th century legend, that of Beinta, the young wife of a priest, whose beauty and grace moved everybody.
According to tradition this magistrate's daughter, who actually existed, caused the untimely death of her first two husbands and led the third into great mischief. This historic inspiration, however, applied only to the exterior setting - Jørgen-Frantz Jacobsen's complex, inscrutable and very human Barbara has little in common with the evil seductress of legend. He writes about Barbara: '...She is faithful in her own way. But she always falls. There is something tragic about this: the hopeless struggle between the good and the feckless in Barbara's character.'