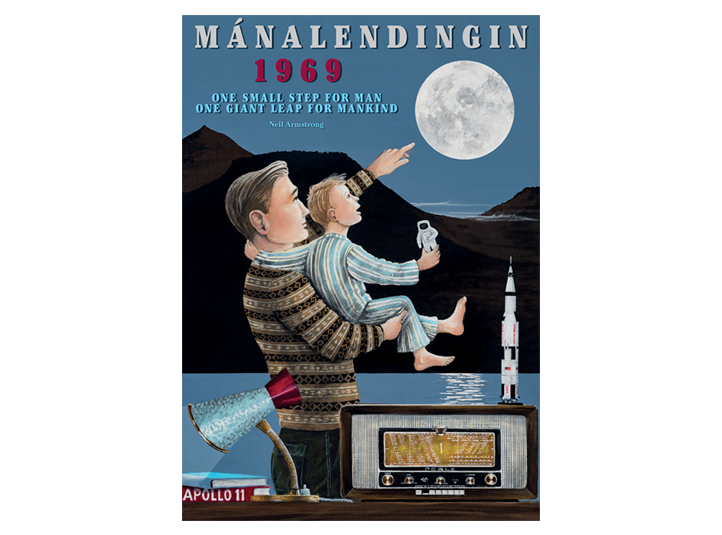 "Houston, Tranquillity Base here. The Eagle has landed.”

"Houston, Tranquillity Base here. The Eagle has landed.” This was the message received by NASA's communication facilities at 20.17 UTC, on Sunday, July 20, 1969. After a nerve-wracking approach, astronauts Neil Armstrong and Buzz Aldrin landed the Eagle, Apollo 11's tiny lunar module, on the surface of the Moon while tens of millions of TV viewers and radio listeners down here on planet Earth heaved a sigh of relief. For the first time in human history mankind had representatives on another celestial body.

"The spaceflight to the moon has ended, they are standing on the Moon. Armstrong is completely calm and confident - and the crew in the control room in Houston has settled down. Now the spaceflight is over, the spacecraft has landed on the Moon ....” In those days the Faroese had no access to television. There were no local stations and no possibilities of viewing land-based antenna signals from neighbouring countries. So here they were, tall and short, old and young, sitting by the radio listening to Jógvan Arge, a young student journalist who was broadcasting directly from one of Denmark Radio studios in Copenhagen to Útvarp Føroya - the Faroese radio station. For about 18 hours Jógvan Arge remained in the studio at Rosenørns Allé following the course of events, right up until 2.56 UTC (the Faroes’ official time zone), when Neil Armstrong stepped on the Moon's surface, left foot first, and pronounced the famous one-liner: “That's one small step for man, one giant leap for mankind!”

Back in the studio in Tórshavn, Radio Director Niels Juel Arge and journalist Finnbogi Ísakson sat and followed the development. Útvarp Føroya made much of the event. Various programme inserts with the Moon as a theme had been prepared, including a short presentation on the Moon's influence on ocean currents in Faroese waters. The well-known Danish TV journalist Jacob Nielsen was in the Faroe Islands at the time sending reports in Danish during the course of events to Danish listeners who lived or were stationed in the islands.

Far away from Houston and far below the Moon, in the town of Klaksvík in the Northern Isles, it was bedtime for four-year-old Edward Fuglø. He had noticed the growing excitement of the adults and heard the radio reports throughout the day and evening. Although he did not fully understand what all the fuss preoccupying the grown-ups was about, he knew something big was happening. Suddenly it seemed that the excitement abated and his father, Jens, took the little one in his arms, walked over to a window and pointed up to the sky telling him about the men who at that very moment had landed on the Moon.

This became one of artist Edward Fugløs's first childhood memories - and 50 years after the event took place, he has illustrated that magic moment on Posta's Anniversary stamp featuring Apollo 11's historic journey to the Moon and Armstrong’s and Aldrin's visit to this faithful companion of planet Earth.

Spaceflights and astronauts constitute one of the many themes present in Edward Fuglø’s art. Some years ago, he created a nine-meter-long satirical painting entitled "The Seagull Has Landed", showing an astronaut planting the Faroese national flag on the Moon, while a group of other astronauts engage in the traditional Faroese chain dance on the Moon’s surface. We are indeed somewhat introverted and love our traditions, but there is also a bit of a space traveller in most of us.

It is also characteristic of most of our generation growing up during the Space Race, especially the American efforts to send men to the Moon. I myself was ten years old when the moon landing took place and remember clearly that evening at home in the kitchen when Jógvan Arge announced that the astronauts had finally landed. It was an adventure which truly captured children's imagination. We knew all about space travels, the names of the astronauts and what they had achieved - and the names of various rockets and crafts associated with them. DANDY, the Danish chewing gum manufacturer, made Bubble Gum packages with collector cards from the space programs in the 1960’s. The chewing gum itself was nothing to cheer for, but each package contained four space travel pictures with information on the backside. We swapped cards during school breaks and talked with expert knowledge of rocket history, from ancient Chinese fireworks to the huge Saturn rockets used in the final Apollo program.

Mercury, Gemini and Apollo - amazing names that encompassed a part of our childhood universe. Spacewalks, docking and berthing spacecrafts, wild accidents and a few tragedies. We grew up in the shadow of heroes like Yuri Gagarin, Alan Shepard, John Glenn, Valentina Tereshkova, Alexey Leonov, Edward White and, not least, Neil Armstrong and Buzz Aldrin. Today, the names and achievements of these astronauts still occupy a special place in memory’s image gallery - and for many of us the rousing words: "Houston, Tranquillity Base here. The Eagle has landed," is synonymous with the greatest achievements of humanity.