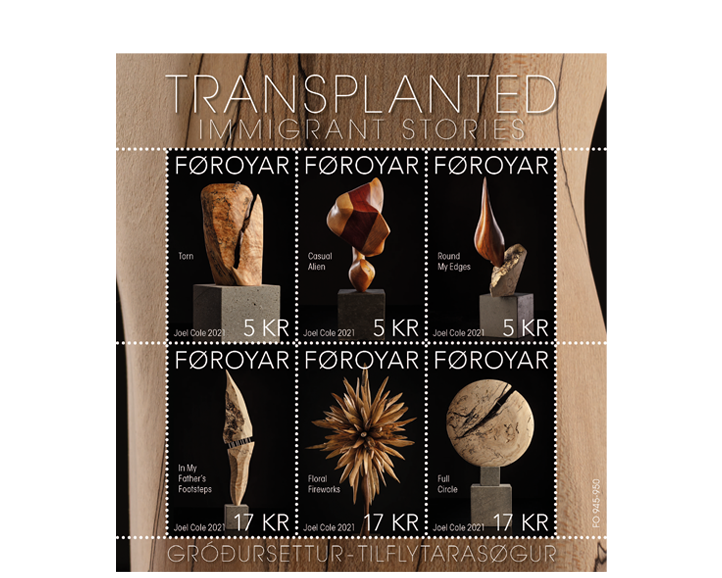 DKK 66,00
€8,84
Buy
-
0
+
Transplanted: Immigrant Stories
As an island nation, the Faroes have a long history of immigration and emigration. Even the Faroese with the deepest roots on the islands have ancestors who came from somewhere else: Norway, Denmark, Scotland, Ireland. Leaving a home and settling in a new one are universal human experiences, commemorated in this sheet of stamps by the sculptor Joel Cole, a Faroese American.
Cole, born in 1968, first came to the Faroes from the United States on a school exchange program for one year in 1986. He spent time in the Faroes almost every year since then until 2011, when he moved to the Faroes permanently; he lives in Saltnes with his Faroese wife. He has five children, all with roots in the Faroes.
In this series of six sculptures, Cole celebrates the immigrant experience, both as a universal element of the human story and through the particulars of his own life. Working with wood harvested from his native state of Minnesota, Cole used the language of forestry when thinking about the process of immigration: to be uprooted, to be transplanted, to be grafted, to wilt, to grow, to thrive. These passages, from the shock of leaving the familiar to putting down roots in new soil, are reflected in his Transplanted series, which consists of more than 50 sculptures in total. The six depicted on these stamps are: "Torn," "Casual Alien," "Round My Edges," "In My Father's Footsteps, "Floral Fireworks," and "Full Circle." Each represents a stage in the passage from foreigner to citizen. Each contains elements of Cole’s native homeland and his adopted homeland.
For Cole, even the process of finding and harvesting his source material brings meaning to his work. He grew up in the to¬¬wn of Shakopee, named for a band of the Dakota tribe, not far from the Mississippi River. Where the riverbanks are steep, old-growth hardwood trees like sugar maple and walnut grow in abundance. It is here he finds timber that has fallen or is near the end of its lifespan to cut as raw material for his works. In this series, he has incorporated raw, cut, and finished Faroese basalt, a stone that is one of the primary substances composing these volcanic isles in the North Atlantic. Each sculpture rests on a foundation of this ancient substance.
Most of the wood he sculpts is sugar maple — dense and finely grained, it is also known as rock maple. A native to Minnesota, sugar maple is so named because it produces an abundance of sweet sap that can be boiled down to make maple syrup. It was well known to the native Dakota who live in the area now and who lived there for thousands of years before immigrants from Europe arrived.
For Cole, this wood echoes his own story, for it also has traveled far from its home, and it too has been forcefully transformed by the journey. Moved by his experience of immigration and his gratitude for the gifts his adopted home has given him, Cole created this series of sculptures as a tribute to the experience of being transplanted — the adventure and excitement, the renunciations, the transformations, and joys of adjusting to and adopting a new home.
The Faroes are one of the most homogenous populations in the world; its approximately 50,000 people are almost entirely of Scandinavian and Irish-Scottish descent. Surprisingly, however, among the islands’ small community of immigrants, there are by some accounts 100 other countries represented. In researching this project, Cole spoke with more than 50 immigrants to the Faroes, gathering their thoughts and adding them to his impressions about the experience of adapting to life far from his origins. The themes that emerged in these conversations helped shape the idea behind each sculpture.
Cole’s work is time-consuming and the fruition of a long process of thought and physical labor. “Themes present themselves as I look at the material immediately at hand,” says Cole, who considers himself an “intuitive abstractionist.”  “Forms that repeat, and present ideas, and hint at things that they could become.  I take these subtle suggestions and meditate on them over the course of several weeks.  When an idea or theme begins to take root, I commit to expressing it in the material.”
“Having successfully immigrated to a new country, I have an intimate understanding of the trials and tribulations people go through when they choose to immigrate,” Cole says.  “I can also sympathize with those who go through the process unwillingly, forced to flee because of war, poverty, famine, or violence.”
“Now that I’ve lived here in the Faroe Islands for nearly a decade, I am grateful for my family, my friends, my work as a teacher and artist, and, in general, my role in society,” he says.  “This gratitude has led me to think about the process I went through, and it’s the inspiration for this series.”
Chris Welsch
Available formats