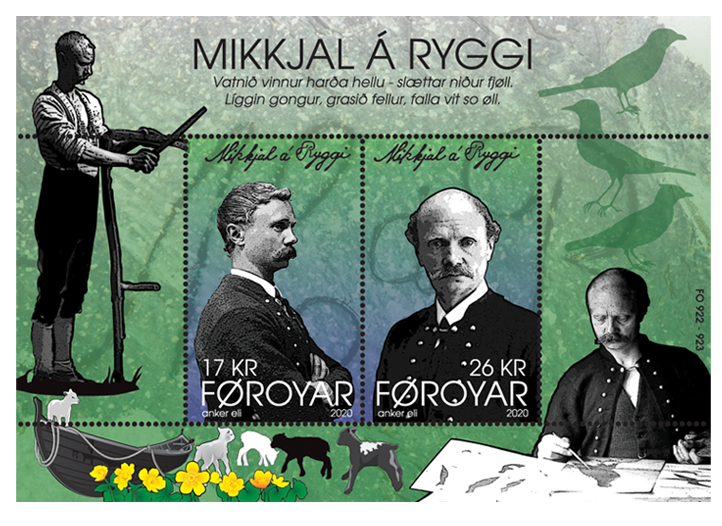 His legacy is a veritable gem-studded string of insights into Faroese culture, nature and working life and history.

Mikkjal Dánjalsson á Ryggi (1879-1956)
The story goes that during hay harvest in 1909, the farmer's son in the farm of "í Beiti" went down to the river Hýsisá, which had probably dried up during the summer - and carved the following poem into the hard rock. Here loosely translated:

Water conquers hard rocks,
Wears down mountains.
The scythe swings, grass falls over,
So also we must fall.

Blood stiffens, the heart stops,
When man expires,
His soul in God’s fair heaven
Will live free and rich.

There were probably many who shook their heads at the zany young man, who spent several days inscribing a poem in a river bed - but over a century later the poem is still there and neither water nor time have managed to wear down Mikkjal's words.

The Book or the Spade
Mikkjal Dánjalsson á Ryggi was born in the village of Miðvágur on Vágoy, October 17, 1879. His father, Dánjal Pauli Mikkelsen, was a well read man, an accomplished historian and active in local community life. In his childhood home "í Beiti", young Mikkjal was provided with propitious settings to become acquainted with traditional Faroese culture - ballads, legends and myths, the social debate and whatever else was afoot at that time. This period in his life also laid the foundation for his firm belief in God which became his steady companion throughout life. There is no doubt that the knowledge and appreciation of Kingo's hymns was a solid foundation for Mikkjal's own contribution to Faroese hymn poetry.

Like all boys at the time, Mikkjal engaged in all kinds of work, on land, at sea and in the mountains. Here he acquired the knowledge of everyday labour and the metamorphoses of nature, which later appeared in his poetry. Wicked tongues claim that he was more disposed to reading books than working with the spade, which is what would be expected of young men in a society where hard physical work was held in higher esteem than that of the spirit.

After elementary school in his hometown, Mikkjal á Ryggi attended the Realskolen – the secondary school - in Tórshavn. At the age of 21 he went to Denmark and attended folk schools in Askov and Frederiksborg from 1900 to 1902 he attended. Back home in the Faroe Islands, Mikkjal, like most other young men, held various odd jobs, on land and at sea.

The poet
The time around the turn of the twentieth century was marked by political turbulence. The Faroese nationalist movement, seeking cultural identity and starting at the Christmas Meeting in 1888, had begun to manifest itself as a political movement. In 1906 it led to the formation of the first political parties in the Faroe Islands. These were respectively the Unionist Party – Sambandsflokkurin - which did not want any changes in the relations with Denmark, and the Self-Government party – Sjálvstýrisflokkurin - which wanted more autonomy.

Mikkjal's father, Dánjal Pauli Mikkelsen, was active in the fight for autonomy - and the son also became engaged, albeit more on the cultural front. That same year Mikkjal's first printed poem was published in the self-governing party's newspaper, Tingakrossur, signed with the pseudonym "Gunleygur". The name of the poem was "Onwards Free Men". In the following period, "Gunleygur" wrote regularly in Tingakrossur. His first poems were political and slightly bombastic.

However, it was not long before direct political messages slipped into the background and the poems tended towards more descriptive and picturesque themes. Although Mikkjal á Ryggi was a phenomenal naturalist, he was not a poet of nature. He was more engaged with the lives and activities of human beings in their natural environment, their work on land and at sea, culture, history and existence in general. These are the main themes of his poetry - and he is regarded as the foremost portrayalist of traditional Faroese working life in the early twentieth century.

The motif on the lower left hand side of the stamp sheet, is based on two of Mikkjal's well-known poems: "Áttamannafarið " (Boat rown by eight) and "Smálombini Spæla" (Little lambs playing).

Mikkjal á Ryggi's only collection of poems, quite appropriately themed around the seasons, was published in 1954.

Mikkjal himself, remained politically active as a supporter of autonomy. He served as mayor in his hometown Miðvágur from 1915 to 1919 and was elected a member of the Lagting, serving from 1924 to 28. He also served on the board of the Faroese Teachers' Union from 1927 to 1934, the last 5 years as chairman.

The Textbook Author
In 1920, Mikkjal á Ryggi worked a teacher in the villages of Bøur and Gásadalur, a position he held for 25 years. Here he met Bina Joensen, the woman he married - and they settled in Gásadalur.

Mikkjal á Ryggi was one of the proponents of using Faroese textbooks and teaching students in Faroese. However, textbooks in the mother tongue were scarce and he therefore undertook the task of writing textbooks for school children. In 1926, his book of geography "Landalære I" was published, co-written with A. Thomsen. 1935 saw the publication of his first biology book, "Zoology I, Mammals".

In 1940, Mikkjal á Ryggi published the local historical work, "Miðvinga Saga", dealing with the history of his hometown dating back to the Middle Ages. He remained  an active writer, and besides poems, he wrote short stories and translated a few Icelandic sagas into Faroese.

In 1951, Mikkjal's second biology book - "Zoology II, Birds", was published. This time the subject turned to bird life in the Faroe Islands. Mikkjal had for a long time been collecting the material, painting colorful illustrations and describing individual birds in an almost anecdotal style, which made it easy for children and adults to get acquainted with Faroese birds. However, the publication was a big disappointment for Mikkjal, since for the sake of reducing printing cost most of the illustrations were in black and white and so small that some details were lost.

The picture to the right of the stamp sheet was taken when Mikkjal was illustrating his book on Faroese birds.

The Hymn Composer
In 1945, Mikkjal á Ryggi retired as a teacher in Bøur and Gásadalur. His retirement was marked with tragedy since during that same year he  became infected with tuberculosis and had to spend the rest of his life at the Tuberculosis Sanatorium in Hoydalar, outside Tórshavn. It was during this long illness that Mikkjal á Ryggi composed most of his hymns. In all, 75 original hymns were composed while 40 hymns were translated from other languages. Although one would think that this tragic fate would lead to depression and a gloomier outlook on life, this was not the case. Mikkjal's hymns are consistently bright and confident, reflecting deep traditional religious beliefs - often spiced with Faroese motifs in their imagery.

On October 20, 1956, Mikkjal á Ryggi died after 11 years of illness. His legacy is a veritable gem-studded string of insights into Faroese culture, nature and working life, and the history of the Faroese Golden Age up until the middle of the twentieth century.