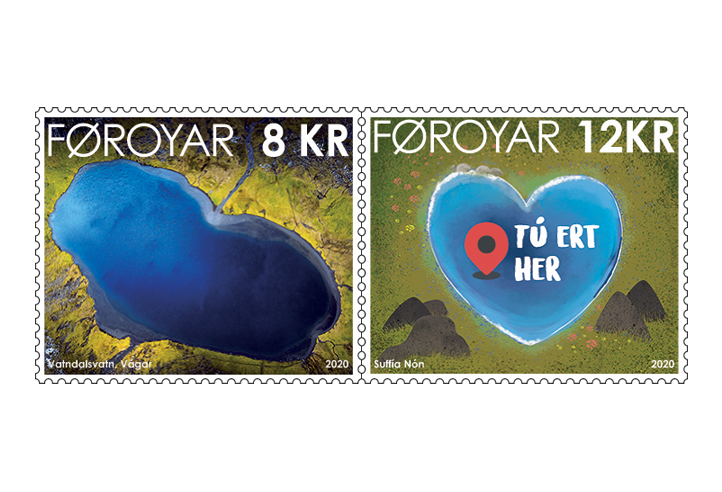 The Heart-Shaped Lake - Set of mint

On Valentine's Day, two stamps are issued. They show Vatndalsvatn - the heart-shaped lake, and a heart with the text "You are here"

A Heart Beats ...
Valentine's Day – the day of lovers and romance. The Day of the Hearts, in which tender love puts out its feelers for reciprocation - while true and stalwart love is affirmed and demonstrated verbally or in writing and by small affectionate gifts.

Faroese Romance
Much can be said about the topography of the Faroe Islands, but romance is not exactly what comes first to mind. Our rugged mountainous islands, shaped by the ravages of millions of years - violent volcanic eruptions, tectonic activity, fluctuating ice ages and perpetual erosion by surf, rain and Atlantic storms – all this may seem a bit ... shall we say ... unromantic to the unwary guest.

But we Faroese know better. Under the rugged exterior, we are actually a loving people with an abundance of romantic stories, legends and ballads. It goes without saying that a culture that has produced proverbs such as: "No one knows in the morning where he will spend the night," has need for security and affection. It has given rise to stories such as the one about the young man who regularly swam from one island to another to meet his beloved – or the pastor who went mad with love for his beautiful but somewhat frivolous wife.

It would probably also amaze the uninitiated if he or she understood the abiding love with which our national romantic poets have portrayed the rugged mountains, the roaring sea and man's wearisome daily life.

The Heart of a Nation
Indeed, the Faroe Islands are a loving and cordial country. In fact, to such an extent that this is inscribed into its very landscape.

On the island of Vágoy, up in the mountain valley above the village of Bøur, you will find the heart of the Faroe Islands. It is a mountain lake by the name of Vatndalsvatn, perfectly shaped like a heart - and in case you doubt it, enter the coordinates: 62 ° 5'32 "N - 7 ° 20'29" W on Google Maps and feast your eyes on this splendid view.

Wicked tongues will probably say that it is the flow of the river Breiðá that has shaped the heart's cleft while the drainage that has created the tip of the heart, but this we can brush these comments aside. Lake Vatndalsvatn is a heart, forged into the indurate basalt, basta! Nature's reminder to all of us that love conquers all.

So, if you want to do something special for your heart's beloved, dispense with the chocolate and buy a ticket to the Faroe Islands. Take her/him on a short but steep hike along Breiðá in Bøur, up to Lake Vatndalsvatn and have a picnic on the shore of the heart of the Faroe Islands. Well, maybe not exactly on February 14, during the dark and dangerous winter. A summer day would also be suberb – going far into the bright romantic summer night.

Reportedly, Lake Vatndalsvatn is also a good place to catch mountain trout if you would get a bit tired of romance.

The Innermost Heart
Contemplating the especially palpable heart of the nation graphic artist Suffía Nón was inspired to design the second stamp, featuring the innermost heart-landscape of every Faroese mind. The childlike and unrestrained heart of an unyielding landscape and an ancient culture.

It is with this in mind that we point out that you, whoever and wherever you may be, are "right here" in our heart.

Valentine’s Day
Valentine's Day, February 14, is a Catholic custom that has spread to other cultures in recent times. On this day, it is customary to send small romantic greetings to the one you love, be it an affectionately worded Valentine card, flowers or gifts such as jewellery or confectionery. To be perfectly honest, commercial motives may probably lurk behind the revitalization of the Valentine tradition, but it is surely a beautiful and harmless gesture in our otherwise prevalent rational age.

The name is mainly attributed to a Christian saint Valentinus who  lived in Rome under Emperor Claudius II. According to tradition, the emperor had difficulties recruiting soldiers into his army and therefore imposed a ban on engagements and marriages in Rome. But St. Valentine, the patron saint of lovers, ignored this ban and secretly married lovers who were so inclined. This, of course, was discovered and the good St. Valentine was arrested and executed on February 14, 269 AD.

During captivity, St. Valentinus became friendly with his jailer’s daughter and exchanged small letters with her, signed, “Your Valentine. "

The story is a legend, with no historical sources - but of course we contemplate it in the name of love.

With sincere affection, Your Valentine.

The Heart shaped Lake - FDC with block of four