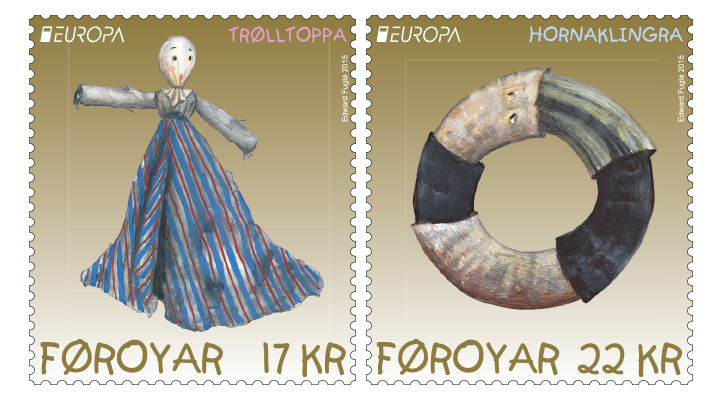 The theme of the 2015 Europa stamp issue is Old Toys.

Old Children’s Toys
The theme of the 2015 EUROPA stamp issue is Old Toys. Edward Fuglø has designed the stamps which feature a rag doll and a horn-hoop, both of which served as children’s toys in the olden days. In order to describe toys that children used to play with we are excerpting a few paragraphs from the book “Faroese Children’s Toys” by Marius Johannesen, published in 1979.

Old Faroese Children’s Toys
“Those of us born around the turn of the 20th century, or a little later, often marvel when the talk turns to youth and children.

The public sector is required to make arrangements for children because they need a place to stay. At the same time the public sector keeps busy providing youth with places where, as the saying goes, they can kill time.

We find this surprising because when we look back at our own youth, wanting to write a few words about the toys we had, we realize that there were virtually no limits to the toys and playgrounds at our disposal. However, no one arranged these playgrounds for us except the good Lord himself. We found them in between the houses, in fields and rivers, at the seashore, everywhere the feet of small children were allowed to roam.

The Rag Doll
In her book “Gamlar gøtur II” (Old Paths) 1967 Maria Skylv writes the following about the rag doll:

“More than eighty years ago little girls playing with dolls were a rare sight. This was not because only few of them owned dolls which their fathers or brothers had brought from other countries. However, a fancy doll like that was not meant for a little girl to play with, oh no! The lid was taken off the cardboard box containing the doll and if there was a shelf in the living room the box was placed there or carefully kept in the family chest. There it could stay for years and only occasionally when the mother had to get something from the chest the little girl was allowed to look at the doll – and even hold her for a while.

Still, it was not necessary to travel abroad to get things to play with because every mother was able to make rag dolls from scratch for her children. Today, few people are able to imagine what the rag doll meant both for the children and their mother. Nowadays stores have an abundance of things bringing joy to the eyes and minds of children - and what mother would not have wanted to make her little ones happy? The problem is that the impeccable toys children get nowadays go a long way to stifle their imagination.

Both boys and girls (as long as they wore gowns and were too small to frolic like boys) played with the rag doll. The body was made of an old woollen garment which was wrapped together. After the doll’s head had been formed the neck was firmly tightened. The piece of garment used for arms was rolled up, placed in the arm pit and tied around the waist.

A white cloth covered the head before the neck was tightened, and sometimes the eyebrows and eyes were painted with a sooty spindle pin. Red chicory paper came in handy for cheeks and lips. The gown was made from an old apron and then the doll was finished, for rag dolls had no legs.”

Horn-hoops
Changing the subject to horns it was common to play with so-called horn-hoops which were circular hoops made of rams' horns. The bone core was removed from the horn and a few horns were put together to make hoops of four, five, six or even more horns. We then went to the hillside to roll horn-hoops. There was no competition - the important thing was to be the possessor of the horn-hoop that could roll as far and as straight as possible before it fell sideways on the ground.

Sometimes we marked man-to-man along the course of the fast-rolling horn-hoop with sticks in our hands trying to strike it down with heavy blows. But when a big horn-hoop came rolling at great speed down a steep hillside you had to be careful not to get in its way because you might get hurt. This was also a more popular game for big boys - the smaller ones kept away from the dangerous horn-hoops and rolled their own ram horn instead. If it was a coiled well-formed horn it could roll as far as any horn-hoop before falling sidelong."