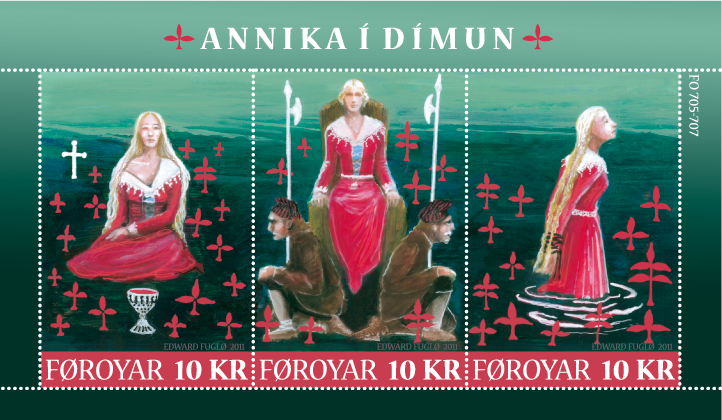 The Legend of Annika i Dímun

Annika of Dímun killed her husband and took one of the farmhands as her lover. She was condemned to death because of her crime but managed to get three men on the island of Dímun to guard and protect her and prevent the authorities from capturing her. The island was defended for three years until one of the men betrayed her and Annika was captured and drowned in Tórshavn harbour.

There is some uncertainty as to the identity of the real Annika of Dímun. The legend says she was the daughter of the Sheriff and niece to the priest on Sandur. She may well have been, but even though her family were fine, they weren't necessarily good people because the legend explains that Annika's father lost her in a game of cards to a peasant on Dímun. Even though she was already engaged to another man she was forced to live on Dímun. If this is correct we can understand her desire to take revenge on her unwanted husband. But whether she actually did kill him is another question.

A woman named Anna Isaksdatter, was drowned in Tórshavn harbour in 1664. She had been condemned for incest, in her case because it was said she had borne children from two men who were brothers.

The legend does not place the father in a favourable light and sympathies lie with Annika even though she killed her husband. Not only had the father lost her in a game of cards, he also mocked her. "What dress shall I wear?" she asked her father as she was taken to Tórshavn. "It doesn't matter," he is supposed to have said. "It's not a wedding you're invited to."

The legend's pity for her is evident in the way it describes how she cared for her son. When the men dragged her away she shouted that they must not forget to give her son his usual cup of morning milk.

It is notable that the woman is the only one among the men in the legend: her father the Sheriff, her peasant husband on Dímun, her lover who failed to defend the island well enough and not least the foreman of the men who came to take her away. A legend says that the foreman was her brother, who would have his own death penalty dropped if he could capture his sister.

Drowning Annika wasn't easy. Her beautiful flowing hair kept her afloat and so her plaits had to be cut before she drowned. The legend describes her as astonishingly beautiful, full of love for her son - a woman who was betrayed by those she trusted.

Caption:
There are two places where it is possible to climb onto Dímun - at the east side of the island and on the west side. Two men guarded these locations.
Annika could defend the island for three years and no unwelcome visitor managed to get onto the island, be they the authorities or otherwise. But in the end, her guards failed her.